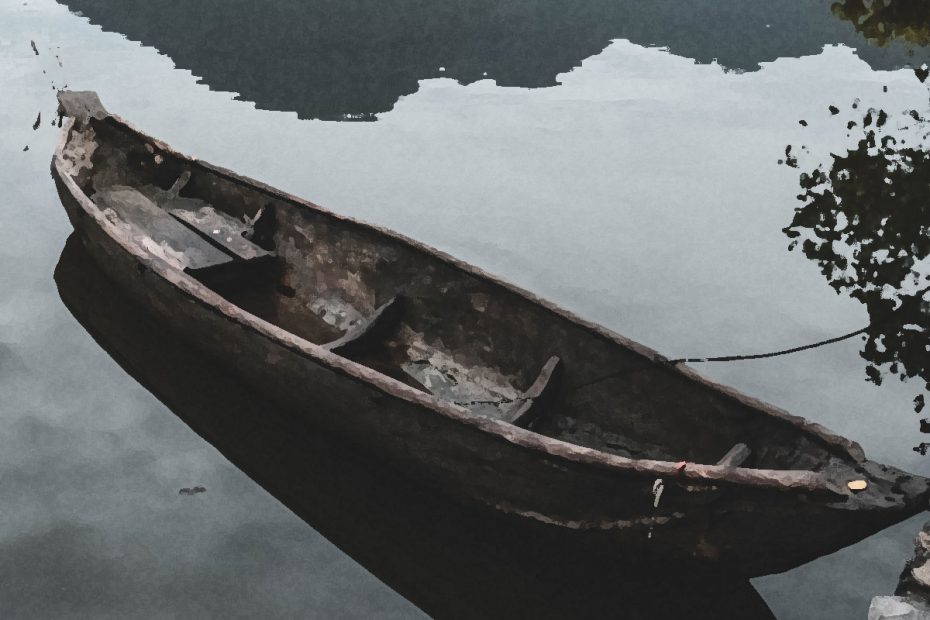 Long ago, there were a number of lonely lumberjacks working in the center of a very large forest. They cut down mammoth trees and watched them crash into the thick snow in exactly the place where they said the trees would land. They would cut up the trees and haul them hither and thither. They worked hard, Mon Dieu, very hard indeed! But they were lonely for the women they had left behind.

On New Years Day, it snowed so hard no work could be done. The men huddled in their camp and spoke longingly of their home. They passed around the rum and drank toasts to the New Year, but finally Baptiste said what they were all thinking: “I wish to go home today and see my girl!” There were murmurs of agreement, but Jean replied: “How can we go home today? There is more than two meters of snow on the road, and more snow is falling.”

“Who said we were walking out of here?” asked Baptiste. “I am going to paddle out in my canoe.” Now the men all knew that Baptiste had a canoe with paddles out back of the camp. Baptiste had made a pact with the devil. If the devil would make the canoe fly wherever Baptiste wished, the lumberjack would not say Mass for an entire year. However, if Baptiste did not return the canoe before dawn of the day after he used it, the devil could keep his soul. While Baptiste and his companions were in la chasse-gallerie, they could not say the name of God or fly over a church or touch any crosses, or the canoe would crash.

Many of the men refused to participate in Baptiste’s New Years scheme, but he managed to find seven companions to fly with him in the canoe back to their home town to visit their women. Baptiste and his friends got into the canoe, and Baptiste said the magic words: “Acabris! Acabras! Acabram!”

When Baptiste was done binding himself to the devil, the canoe rose into the air and the men began to paddle their way through the sky to their home. Their womenfolk were so glad to see them! They celebrated long into the night, drinking and dancing. It was close to dawn when the men realized they had to return the canoe to the lumber camp by dawn or forfeit their souls. They searched for Baptiste, and found him as drunk as a lord, lying under a table at the inn. They bundled him into the canoe, spoke the magic words, and paddled away. Knowing that Baptiste would start swearing if they woke him, one of the men tied him up and gagged him so he would not speak the name of God at an inopportune moment and crash the canoe.

When Baptiste awoke, he sat up, struggling with the ropes that bound him. He managed to loosen the gag, and shouted: “Mon Dieu, why have you tied me up?”

At the name of God, the canoe took a nose-dive, plunging towards the ground. It hit the top of a large pine tree and all the men tumbled out and fell down, down into the darkness just before dawn. They were never seen again!

I am not an imaginative man, and no one who knows me can say that I have ever indulged in sentimenta…

I am not a superstitious man, far from it, but despite all my efforts to the contrary I could not he…

The little town of Caub is very old. Above it in olden days rose the Castle of Gutenfels. Here many …