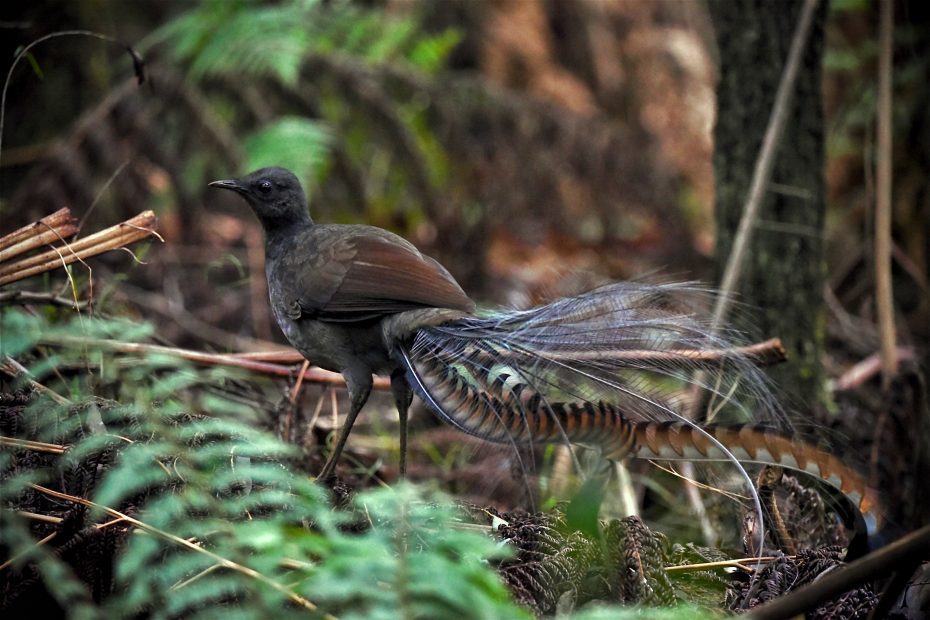 Weedah was an evil man who lived way back in the bush near several villages. Now, Weedah did not want to share the bush with all these folks. He was very greedy. He thought all the land should belong to him, and no one else should live on it. So, Weedah started playing a great trick on the people who shared the bush with him.

Weedah built himself a number of grass nyunnoos, more than twenty. He made fires before each, to make it look as if someone lived in the nyunnoos. First he would go into one nyunnoo and cry like a baby, then to another and laugh like a child, then in turn, as he went the round of the homes he would sing like a maiden, corrobboree like a man, call out in a quavering voice like an old man, and in a shrill voice like an old woman; in fact, imitate any sort of voice he had ever heard, and imitate them so quickly in succession that any one passing would think there was a great crowd of people in that camp. Curious hunters would come to see who lived in the village, and Weedah would kill them before they realized they were in danger. And so, the surrounding lands slowly emptied of people. Some of the fellows were killed by Weedah, and others fled when they realized an unknown danger lurked in the bush, picking them off one by one.

One day, Beeargah the cousin of Mullyan the eagle hawk, passed within earshot of Weedah’s false camp. Hearing the various voices, he wondered what tribe could be there. Curiosity drew him over to the grass nyunnos, and he peered into the camp, only to see Weedah standing alone. Puzzled, Beeargah advanced towards him.

Weedah stood at a little distance from a big glowing fire, where he waited until Beeragah came quite close to him. Then he asked him what he wanted. Beeragah said he had heard many voices and had wondered what tribe it could be, so had come near to find out.

Weedah said: “But only I am here. How could you have heard voices? See; look round; I am alone.”

Bewildered, Beeragah looked around and said: “Where are they all gone? As I came, I heard babies crying, men calling, and women laughing; many voices I heard but you are the only I see.”

“And only I am here. The wind must have stirred the branches of the balah trees, and you must have thought it was the wailing of children, the laughing of the gouggourgahgah you heard, and thought it the laughter of women and mine must have been the voice as of men that you heard. Alone in the bush, as the shadows fall, a man breeds strange fancies. See by the light of this fire, where are your fancies now? No women laugh, no babies cry, only I, Weedah, talk.”

As Weedah was talking, he kept edging Beeragah towards the fire. When they were quite close to it, he turned swiftly, seized him, and threw him right into the middle of the blaze.

After many days had passed, Mullyan, the eagle hawk grew concerned for his cousin Beeargah, who returned to his camp no more. Mullyan made up his mind to get on his track and follow it, until at length he solved the mystery. He found the track of Beeargah as he had chased the kangaroo to where he had slain it, and then he followed his homeward trail. Over stony ground he tracked him, and through sand, across plains, and through scrub.

At last, in a scrub and still on the track of Beeargah, he heard the sounds of many voices, babies crying, women singing, men talking. Peering through the bush, finding the track took him nearer the spot whence came the sounds, he saw the grass humpies.

“Who can these be?” he thought.

The track led him right into the camp, where alone Weedah was to be seen. Mullyan advanced towards him and asked about the people whose voices he had heard as he came through the bush.

Weedah said: “How can I tell you? I know of no people; I live alone.”

“But,” said Mullyan, the eagle hawk, “I heard babies crying, women laughing, and men talking, not one but many.”

“And I alone am here. Ask of your cars what trick they played you, or perhaps your eyes fail you now. Can you see any but me? Look for yourself.”

“And if, as indeed it seems, you only are here, what did you with Beeargah my cousin, and where are my friends? Many are their trails that I see coming into this camp, but none going out. And if you alone live here, you alone can answer me.”

“What know I of you or your friends? Nothing. Ask of the winds that blow. Ask of Bahloo the moon, who looks down on the earth by night. Ask of Yhi the sun, that looks down by day. But ask not Weedah, who dwells alone, and knows naught of your friends.” But as Weedah was talking he was carefully edging Mullyan towards the fire.

Mullyan, the eagle hawk, too, was cunning, and not easy to trap. He saw a blazing fire in front of him, lie saw the track of his friend behind him, he saw Weedah was edging him towards the fire, and it came to him in a moment the thought that if the fire could speak, well could it tell where were his friends. But the time was not yet come to show that he had fathomed the mystery. So he affected to fall into the trap. But when they reached the fire, before Weedah had time to act his usual part, with a mighty grip Mullyan the eagle hawk seized him, saying,

“Even as you served Beeargah the hawk, my cousin, and my friends, so now serve I you.” And right into the middle of the blazing fire he threw him. Then he turned homewards in haste, to tell the black fellows that he had solved the fate of their friends, which had so long been a mystery.

When he was some distance from the Weedah’s camp, he heard the sound of a thunderclap. But it was not thunder; it was the back of Weedah’s head, bursting with a bang as loud as a thunderclap. And as it burst, out from his remains rose a bird, Weedah, the mockingbird; which bird to this day has a hole at the back of his head, in just the same place as Weedah’s head had burst, and whence the bird came forth.

To this day the Weedah makes grass playgrounds, through which he runs, imitating, as he plays, in quick succession, any voices he has ever heard, from the crying of a child to the laughing of a woman; from the mewing of a cat to the barking of a dog, and hence his name Weedah, the mocking bird.

Tags:AustraliaAustralian Folklore
previousThe Emu and the Bustard
nextThunder and Anansi