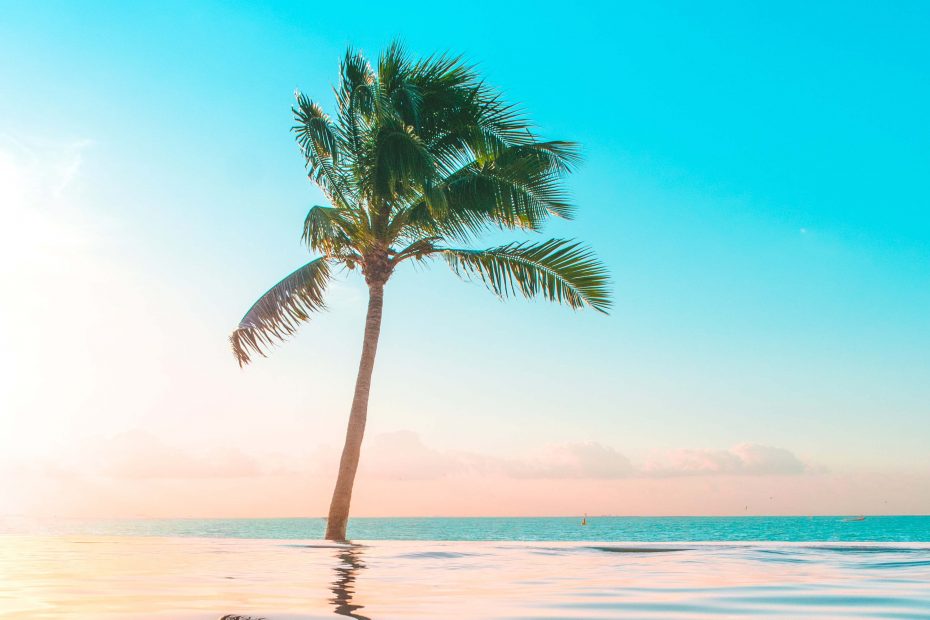 There had been a long and severe famine in the land where Anansi lived. He had been quite unable to obtain food for his poor wife and family.

One day, gazing desperately out to sea, he saw, rising from the midst of the water, a tiny island with a tall palm-tree upon it. He determined to reach this tree—if any means proved possible—and climb it, in the hope of finding a few nuts to reward him. How to get there was the difficulty.

This, however, solved itself when he reached the beach, for there lay the means to his hand, in the shape of an old broken boat. It certainly did not look very strong, but Anansi decided to try it.

His first six attempts were unsuccessful—a great wave dashed him back on the beach each time he tried to put off. He was persevering, however, and at the seventh trial was successful in getting away. He steered the battered old boat as best he could, and at length reached the palm-tree of his desire. Having tied the boat to the trunk of the tree—which grew almost straight out of the water—he climbed toward the nuts. Plucking all he could reach, he dropped them, one by one, down to the boat. To his dismay, everyone missed the boat and fell, instead, into the water until only the last one remained. This he aimed even more carefully than the others, but it also fell into the water and disappeared from his hungry eyes. He had not tasted even one and now all were gone.

He could not bear the thought of going home empty-handed, so, in his despair, he threw himself into the water, too. To his complete astonishment, instead of being drowned, he found himself standing on the sea-bottom in front of a pretty little cottage. From the latter came an old man, who asked Anansi what he wanted so badly that he had come to Thunder’s cottage to seek it. Anansi told his tale of woe, and Thunder showed himself most sympathetic.

He went into the cottage and fetched a fine cooking-pot, which he presented to Anansi—telling him that he need never be hungry again. The pot would always supply enough food for himself and [41]his family. Anansi was most grateful, and left Thunder with many thanks.

Being anxious to test the pot at once, Anansi only waited till he was again seated in the old boat to say, “Pot, pot, what you used to do for your master do now for me.” Immediately good food of all sorts appeared. Anansi ate a hearty meal, which he very much enjoyed.

On reaching land again, his first thought was to run home and give all his family a good meal from his wonderful pot. A selfish, greedy fear prevented him. “What if I should use up all the magic of the pot on them, and have nothing more left for myself! Better keep the pot a secret—then I can enjoy a meal when I want one.” So, his mind full of this thought, he hid the pot.

He reached home, pretending to be utterly worn out with fatigue and hunger. There was not a grain of food to be had anywhere. His wife and poor children were weak with want of it, but selfish Anansi took no notice of that. He congratulated himself at the thought of his magic pot, now safely hidden in his room. There he retired from time to time when he felt hungry and enjoyed a good meal.

His family got thinner and thinner, but he grew plumper and plumper. They began to suspect some secret and determined to find it out. His eldest son, Kweku Tsin, had the power of changing himself into any shape he chose; so, he took the form of a tiny fly, and accompanied his father everywhere. At last, Anansi, feeling hungry, entered his room and closed the door. Next, he took the pot, and had a fine meal. Having replaced the pot in its hiding-place, he went out, on the pretense of looking for food.

As soon as he was safely out of sight, Kweku Tsin fetched out the pot and called all his hungry family to come at once. They had as good a meal as their father had had. When they had finished, Mrs. Anansi—to punish her husband—said she would take the pot down to the village and give everybody a meal. This she did—but alas! in working to prepare so much food at one time, the pot grew too hot and melted away. What was to be done now? Anansi would be so angry! His wife forbade every one to mention the pot.

Anansi returned, ready for his supper, and, as usual, went into his room, carefully shutting the door. He went to the hiding-place—it was empty! He looked around in consternation. No pot was to be seen anywhere. Someone must have discovered it. His family must be the culprits; he would find a means to punish them.

Saying nothing to any one about the matter, he waited till morning. As soon as it was light he started off towards the shore, where the old boat lay. Getting into the boat, it started of its own accord and glided swiftly over the water—straight for the palm-tree. Arrived there, Anansi attached the boat as before and climbed the tree. This time, unlike the last, the nuts almost fell into his hands. When he aimed them at the boat they fell easily into it—not one, as before, dropping into the water. He deliberately took them and threw them overboard, immediately jumping after them. As before, he found himself in front of Thunder’s cottage, with Thunder waiting to hear his tale. This he told, the old man showing the same sympathy as he had previously done.

This time, however, he presented Anansi with a fine stick and bade him good-bye. Anansi could scarcely wait till he got into the boat—so anxious was he to try the magic properties of his new gift.

“Stick, stick,” he said, “what you used to do for your master do for me also.”

The stick began to beat him so severely that, in a few minutes, he was obliged to jump into the water and swim ashore, leaving boat and stick to drift away where they pleased. Then he returned sorrowfully homeward, bemoaning his many bruises and wishing he had acted more wisely from the beginning.