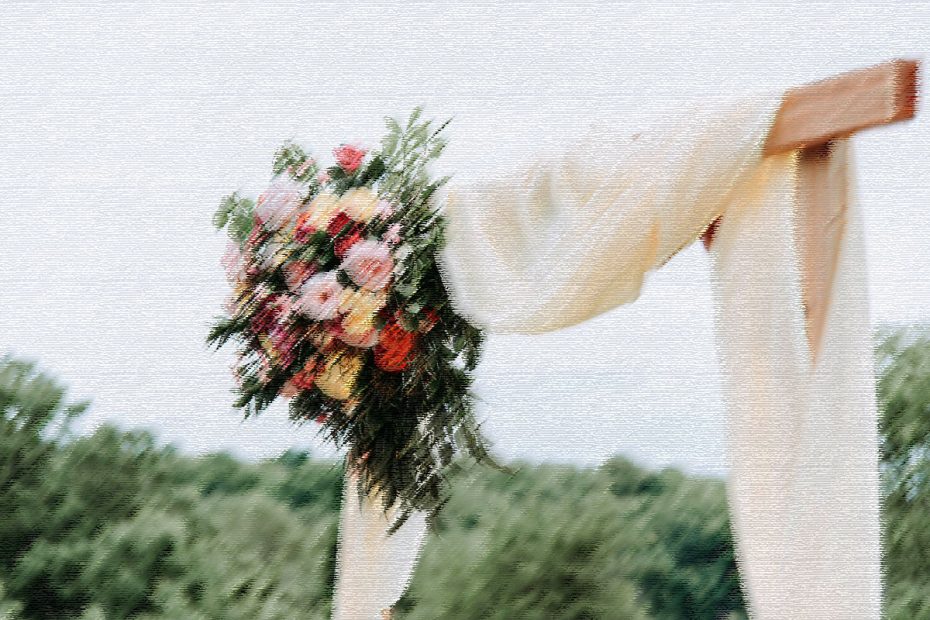 “Hold still, Thor. I’m trying to fix your train.” Loki folded a piece of white silk and applied the pins.

“I look ridiculous,” said Thor gloomily. The huge red-haired thunder god stared in the mirror at his muscular frame squeezed into the tight wedding gown. He frowned. Outside, thunder growled in response.

Loki pressed his lips together to keep them from twitching. “Nonsense, Thor. You look beautiful. It’s natural for a bride to be nervous.” Loki dodged swiftly to avoid the blow Thor aimed at his head.

“If I had my hammer, I would knock you down to earth,” Thor threatened.

“But not me,” howled Thor, “He wants Freyja, the goddess of Love.”

“But Freyja will not have him,” Loki retorted. “Now, do you or don’t you want Mjolner back?”

“Then put on this veil and for Asgard’s sake, try to act like a blushing bride!” Loki jammed the face-concealing veil on Thor’s head, swept a white bridal cloak made of fake falcon feathers (hastily plucked from a flock of chickens) around the Thunderer’s shoulders and shoved him out the door.

Dark clouds swirled above the glowing golden chariot in the center of the courtyard and thunder growled menacingly as the bride stomped outside, white feathers quivering with rage. To Loki’s eye, Thor resembled an giant, irate chicken whose egg had been stolen from her nest.

“Don’t cluck too soon and give us away, my friend,” Loki whispered irreverently as he jogged after the Thunderer. Loki pushed Thor into the gleaming chariot, scooped up his own long serving woman skirts and joined his huge friend in the vehicle.

“This will be a wedding Thrym will not forget,” Thor said, taking up the reigns.

“Nor will I,” Loki murmured with a sidelong look at his finely feathered friend. Thor glared at him, his fiery gaze burning holes through the white bridal veil. “Careful,” Loki said, waving a hand to magically turn the burned bits back to white veiling. Thor shook himself all over, white feather’s quivering, and then he sent the golden chariot leaping into the skies and turned the glowing vehicle toward Jotunheim, the land of the giants.

In spite of their ridiculous garb, the matter at hand was serious. Asgard, the realm of the gods, was in danger. The Frost Giants had threatened her borders for as long as Loki could remember. However, Thor had always driven them back using the power of his hammer. Then the King of the Frost Giants had stolen Mjolner. Thrym’s price for returning the magical hammer was the hand of the lovely goddess Freyja in marriage. But Freyja had flatly refused to marry Thrym, putting the gods in an awkward situation. The gods had demanded a replacement bride, and that’s when Loki came up with this plan. He would disguise Thor himself as Freyja and Thor would fly to the kingdom of the Frost Giants to marry Thrym and steal back his hammer. Thor was under strict instructions to keep his mouth shut during the wedding feast and ceremony, because his bass voice was sure to give him away at once. Loki, in his guise as serving maid, would do all the talking for the pair.

The bridal chariot made a spectacular entrance into Jotunheim. The clouds massed miles deep, swirling wildly and bellowing thunder along the mountaintops. Fire blazed the chariot’s path and lightning flashed repeatedly within the swirling nimbus above their heads. But Thrym was not intimidated. He stood before the giants’ Feasting Hall with a fatuous smile on his craggy face. The King of the Frost Giant’s almost knocked Loki over in his eagerness to help the looming white figure out of the chariot. The King escort his silent bride into the great hall, her white feathered cloak and face-concealing veil flapping in the swirling breezes of the thunderstorm, leaving Loki to park the chariot and trot along behind.

King Thrym had outdone himself. Inside the Feasting Hall, tables groaned under the weight of fifteen massive oxen, and Loki could smell fresh salmon. The giants cheered madly when the silent bride was seated at the head table in a swirl of white chicken feathers. As he took his place behind Thor, Loki looked about for the hammer. It was nowhere to be seen.

As the wedding feast progressed, Loki became more and more uneasy. Thor seemed to think that the best way to keep his mouth shut was to fill it with food. The Thunderer was eating in massive quantities more suitable for a large god then a blushing bride.

“Don’t eat so much,” Loki hissed at Thor, after he swallowed most of an ox by himself.

“Ummmmm,” was Thor’s only reply.

The guests had abandoned their own eating to watch the hungry bride. Loki squirmed with embarrassment as Thor consumed eight large salmon, one right after the other. When Thor commandeered three large barrels of mead for himself, Loki whispered to Thrym: “Freyja was so excited she has not eaten a morsel for a week.”

“I could barely eat myself,” said Thrym besottedly. He patted Thor’s hand and playfully lifted the edge of the veil. Thrym caught a glimpse of ice blue eyes with lightening in their depths and dropped the veil in shock, springing away from his bride.

“Why are Freyja’s eyes so bright?” Thrym cried. “They burn like fire!”

“Freyja has not slept in a week,” Loki said soothingly, leading Thrym back to his seat. “Bridal nerves.”

Loki aimed a warning kick at Thor’s ankle. The clouds outside growled in response. All around the long table, the giants were casting doubtful looks at the bride. Thrym gazed around at his uneasy guests and leapt to his feet.

“Bring the hammer! I am impatient to be wed,” King Thrym cried.

Rolls of thunder came from outside. Loki saw Thor’s muscles tense under the white silk and feathers as the servants brought in the hammer. Ceremoniously it was placed on Thor’s lap. Instantly, Thor sprang from his chair, his veil ripping away. He swung his hammer around his head, his white feathered cloak flapping wildly about his massive form and the house was rocked to its foundations. Guests scrambled everywhere, fleeing for the doors as a brilliant flash of lightning set the roof ablaze. A roar of thunder caused the pillars to crumble and the Feasting Hall collapsed inward on the screaming guests.

From his vantage point on a nearby hillside, Loki saw Thor throw Thrym into a storage shed to await trial for the stealing of the hammer Mjolner. Then Thor made his way up to the place where Loki stood surveying the smoking ruins of the giants’ Feasting Hall.

Loki looked at Thor. His lips twitched as he gazed at the tattered remains of the white wedding gown and the flapping chicken-feather cloak.

“Do not say a word!” Thor threatened to box his ears with the hammer.

Copyrighted content: This is an original retelling by S.E. Schlosser, who owns the copyright for this version of the fairy tale. It may not be reproduced, reprinted or used in any other way without the permission of the author. Teachers may link to or photocopy this story as part of their classwork.