The Miller, His Son and The Donkey 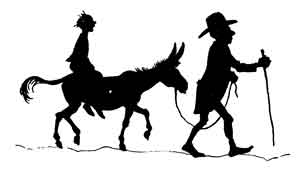 A Miller, accompanied by his young Son, was driving his donkey to market in hopes of finding a purchaser for him. On the road they met a troop of girls, laughing and talking, who exclaimed, “Did you ever see such a pair of fools? To be trudging along the dusty road when they might be riding!” The Miller thought there was sense in what they said;

so he made his Son mount the donkey, and himself walked at the side. Presently they met some of his old cronies, who greeted them and said, “You’ll spoil that Son of yours, letting him ride while you toil along on foot!

Make him walk, young lazybones! It’ll do him all the good in the world.” The Miller followed their advice, and took his Son’s place on the back of the donkey while the boy trudged along behind. They had not gone far when they overtook a party of women and children, and the Miller heard them say, “What a selfish old man!

He himself rides in comfort, but lets his poor little boy follow as best he can on his own legs!” So he made his Son get up behind him. Further along the road they met some travelers, who asked the Miller whether the donkey he was riding was his own property, or a beast hired for the occasion.

He replied that it was his own, and that he was taking it to market to sell. “Good heavens!” said they, “with a load like that the poor beast will be so exhausted by the time he gets there that no one will look at him. Why, you’d do better to carry him!” “Anything to please you,” said the old man, “we can but try.” So, they got off, tied the donkey’s legs together with a rope and slung him on a pole, and at last reached the town, carrying him between them. This was so absurd a sight that the people ran out in crowds to laugh at it, and chaffed the Father and Son unmercifully, some even calling them lunatics.

They had then got to a bridge over the river, where the donkey, frightened by the noise and his unusual situation, kicked and struggled till he broke the ropes that bound him, and fell into the water and was drowned. Whereupon the unfortunate Miller, vexed and ashamed, made the best of his way home again, convinced that in trying to please all he had pleased none, and had lost his donkey into the bargain.