The Lorelei of the Rhine 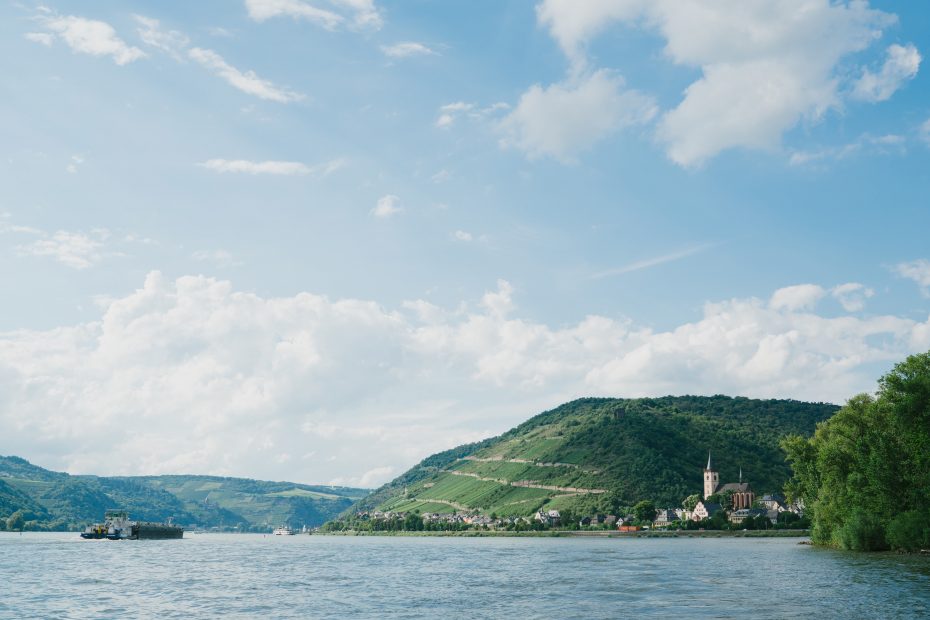 Count Ludwig was the only son of the Prince Palatine. He lived with his father in the castle at Stahleck. The young count had heard many marvelous tales of the beautiful Lorelei and he determined to go in search of her.

One evening he stole from his father’s castle to sail down the Rhine. He hoped to catch a glimpse of the Siren Lorelei. The stars were twinkling softly overhead, and the bark slowly drifted down the river. Darker and darker grew the waters as the bed of the Rhine grew narrower. But the young count did not notice this. His eyes were fixed on the rocks far above, where he hoped to see the beautiful nymph.

Suddenly he saw a shimmer of white drapery and golden hair. At the same time, he heard the faint, sweet sound of an alluring song. As he drew nearer, the melody became more distinct. The moonbeams fell upon the maiden and seemed to make her even more beautiful. She bent over the rocky ledge and beckoned him to draw nearer.

The count and boatman were spellbound by the vision above them, and they paid no heed to the vessel. Suddenly the boat struck against the rocks and went to pieces. The men struggled against the swift current, and all escaped except the young count. Him the Lorelei took down to her magic palace below the river to be her lover forever. Many different stories about the young count’s fate were related by the men who escaped.

The Prince Palatine was deeply grieved over his only son’s death. He blamed the beautiful Lorelei and longed for revenge. Finally he sent for one of his greatest warriors.

“You are to capture this wicked creature who has caused so much woe,” he said. “Take a band of armed men and post them at once all around the rock, so that the nymph cannot escape.”

The great warrior did as he was commanded. At the head of a band of armed men he climbed noiselessly up the moonlit cliff and presented himself before the charming Lorelei. There she sat, as usual, combing her golden hair and crooning her matchless song. The men hemmed her in on all sides. They left no mode of escape except by the steep descent to the river.

“We command you to surrender,” said the captain of the band.

The nymph made no reply, but gracefully waved her white hands. The grim old warriors suddenly felt as if rooted to the spot. They could neither move nor speak.

There they stood motionless with dilated eyes fixed upon the Lorelei. They saw her remove all of her jewels and drop them one by one into the Rhine beneath her feet. Then she whirled about in a mystic spell, chanting her magic tunes. They could understand nothing of it except now and then a word about white-maned steeds and pearl shell chariots.

When the song and dance were ended, the waters of the Rhine began to seethe and bubble. Higher and higher they rose, until they reached the top of the cliff.

The petrified warriors felt the cold tide surge about their feet. Suddenly they saw a great white-crested wave rolling rapidly toward them. In its green depths they beheld a chariot drawn by white-maned steeds. Into this car the Lorelei sprang and quickly vanished over the edge of the cliff into the river.

In a few moments the angry waters had sunk to their usual level. The brave warriors discovered that they could move once more. They rubbed their eyes and looked about them. No trace of the sudden rise except the water drops along the face of the cliff could be seen. These shone in the moonlight like diamonds.

The Lorelei has never since then appeared on the cliff. But boatmen have often heard the faint sweet echo of her alluring song, wafted toward them on the summer breeze at midnight. It is said that she remains in her beautiful palace and gardens below the green Rhine, enjoying the companionship of her earthly lover.