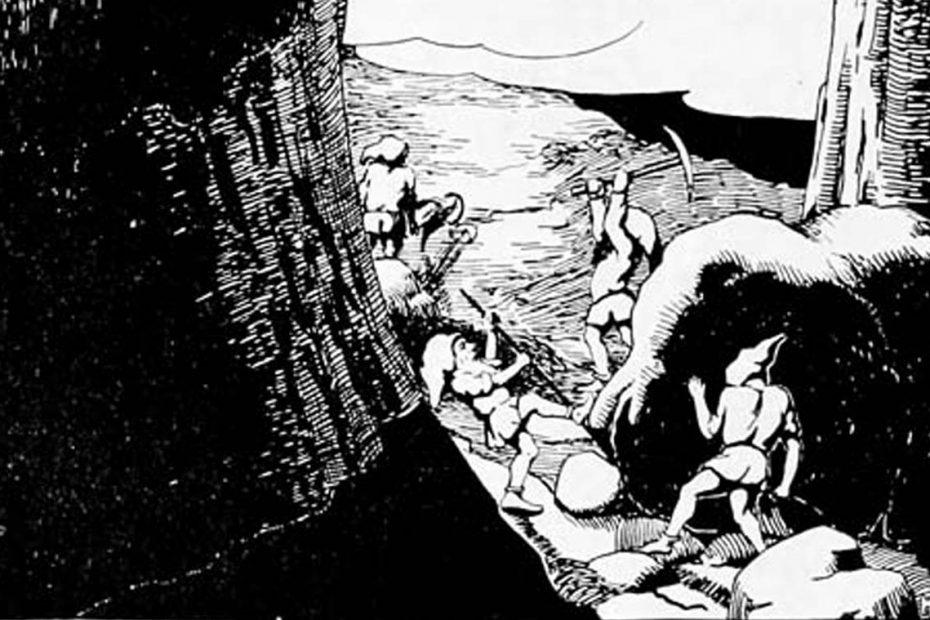 On the high hill above the Rhine still stand the ruins of an old Castle. Here Kuno Von Sayne once lived. Kuno was a very proud young man for he was a member of a very noble family.

He had fallen in love with the beautiful daughter of the surly old Lord of Faulkenstein. At last he succeeded in winning the love of the maiden, but of her father he had great fear.

After many months of hoping and fearing, he decided to go to the old Lord and ask for his daughter’s hand. One beautiful morning he set out on his mission, to the Castle of Faulkenstein. This Castle was perched far up on the heights that rose above a small river.

It was a long journey, and he had almost lost his courage when he reached the place. However, he went at once into the presence of the Lord of Faulkenstein and boldly made known his wish.

The grim, old Lord looked at him long and closely, then in tones that were terrible to poor Kuno spoke.

“I will,” he said, “consider the matter if you will promise to do one thing for me.”

Without waiting to find out what he was to do, Kuno eagerly consented.

“Then,” said the Lord of Faulkenstein, “you may wed my daughter on condition that you build a convenient road over the jagged rock to the village. You are to ride up that road on your war horse before sunrise to-morrow morning.”

Poor Kuno was speechless. Nothing was to be said, for he knew how impossible the task was. Many months of hard labor would scarcely accomplish the great work.

Sadly, he made his way down the rocks again. He had not been able to catch even a glimpse of the fair Irmangarde, his beloved, so he sat down upon a rock in the valley and began to reproach himself for his stupidity.

Suddenly he was aroused from his thoughts by a small voice calling to him.

He looked up and there before him stood the King of the Gnomes.

“Despair not,” said the kindly little man. “Myself and my subjects will gladly help so good a knight; so away to the inn where you left your steed. Before sunrise to-morrow morning the road shall be ready.”

At this the King of the Gnomes waved his hand. A great mist rose and covered the hill and valley with its dense vapor. Thousands of dwarf-like creatures now sprang out of the ground on all sides. They began using axes, hammers, and spades with great good will. All night long Kuno Von Sayne heard the crashing of great forest trees, and the breaking of stones. Now and then he heard a loud rumble like thunder; there was a continual clatter and crashing throughout the whole night. At dawn he came from his room and was greeted by the innkeeper.

“A great storm must have raged over the valley last night,” said the latter. “I was kept awake all the night by the noise.”

Kuno did not pause to listen to the man’s tales, but loudly called for his horse. He mounted and rode rapidly away to the foot of the mountain. Far above him loomed the Castle of Faulkenstein. How Kuno’s heart leaped with joy. There, indeed, was a road leading up to the Castle. True to his promise, the King of the Gnomes had built a broad, convenient road through the forest and over the rocks. Kuno galloped boldly up, exchanging smiles with the kindly dwarfs who peered at him from behind every rock and tree. From the ramparts of the Castle, stepped the beautiful Irmangarde.

Kuno dashed over the arched bridge the dwarfs were just finishing and greeted her gaily. The dwarfs raised a glad shout of triumph. The Knight of Faulkenstein was awakened by the shout. He looked out, and there, stretching far out from the Castle, saw the newly built road. He thought he must still be dreaming and rubbed his eyes again and again.

When, however, he saw the beaming face of Irmangarde and Kuno, he knew that he had been outwitted. So as the first sunbeams fell upon the Castle, lighting up the gladdened heart and blushing cheeks of the maiden, Kuno claimed her as his bride. The Lord of Faulkenstein was proud to accept a man who could do such wonderful things as Kuno had accomplished during the night.