The Emu and the Bustard 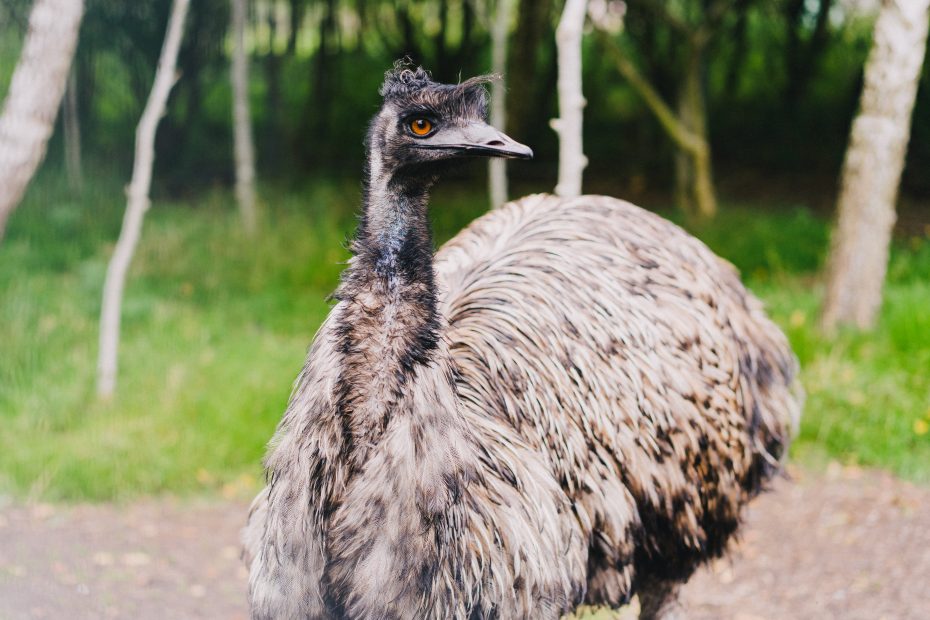 Dinewan the emu, being the largest bird, was acknowledged as king by the other birds. The Goomblegubbons, the bustards, were jealous of the Dinewans. Particularly was Goomblegubbon, the mother, jealous of the Diriewan mother. She would watch with envy the high flight of the Dinewans, and their swift running. And she always fancied that the Dinewan mother flaunted her superiority in her face, for whenever Dinewan alighted near Goomblegubbon, after a long, high flight, she would flap her big wings and begin booing in her pride, not the loud booing of the male bird, but a little, triumphant, satisfied booing noise of her own, which never failed to irritate Goomblegubbon when she heard it.

Goomblegubbon used to wonder how she could put an end to Dinewan’s supremacy. She decided that she would only be able to do so by injuring her wings and checking her power of flight. But the question that troubled her was how to affect this end. She knew she would gain nothing by having a quarrel with Dinewan and fighting her, for no Goomblegubbon would stand any chance against a Dinewan, There was evidently nothing to be gained by an open fight. She would have to affect her end by cunning.

“But you have wings,” said Dinewan.

“No, I have no wings.” And indeed she looked as if her words were true, so well were her wings hidden, as she squatted in the grass. Dinewan went away after awhile, and thought much of what she had heard. She talked it all over with her mate, who was as disturbed as she was. They made up their minds that it would never do to let the Goomblegubbons reign in their stead, even if they had to lose their wings to save their kingship.

At length they decided on the sacrifice of their wings. The Dinewan mother showed the example by persuading her mate to cut off hers with a combo or stone tomahawk, and then she did the same to his. As soon as the operations were over, the Dinewan mother lost no time in letting Goomblegubbon know what they had done. She ran swiftly down to the plain on which she had left Goomblegubbon, and, finding her still squatting there, she said: “See, I have followed your example. I have now no wings. They are cut off.”

“Ha! ha! ha!” laughed Goomblegubbon, jumping up and dancing round with joy at the success of her plot. As she danced round, she spread out her wings, flapped them, and said: “I have taken you in, old stumpy wings. I have my wings yet. You are fine birds, you Dinewans, to be chosen kings, when you are so easily taken in. Ha! ha! ha!” And, laughing derisively, Goomblegubbon flapped her wings right in front of Dinewan, who rushed towards her to chastise her treachery. But Goomblegubbon flew away, and, alas! the now wingless Dinewan could not follow her.

Brooding over her wrongs, Dinewan walked away, vowing she would be revenged. But how? That was the question which she and her mate failed to answer for some time. At length the Dinewan mother thought of a plan and prepared at once to execute it. She hid all her young Dinewans but two, under a big salt bush. Then she walked off to Goomblegubbons’ plain with the two young ones following her. As she walked off the morilla ridge, where her home was, on to the plain, she saw Goomblegubbon out feeding with her twelve young ones.

After exchanging a few remarks in a friendly manner with Goomblegubbon, she said to her, “Why do you not imitate me and only have two children? Twelve are too many to feed. If you keep so many they will never grow big birds like the Dinewans. The food that would make big birds of two would only starve twelve.” Goomblegubbon said nothing, but she thought it might be so. It was impossible to deny that the young Dinewans were much bigger than the young Goomblegubbons, and, discontentedly, Goomblegubbon walked away, wondering whether the smallness of her young ones was owing to the number of them being so much greater than that of the Dinewans.

It would be grand, she thought, to grow as big as the Dinewans. But she remembered the trick she had played on Dinewan, and she thought that perhaps she was being fooled in her turn. She looked back to where the Dinewans fed, and as she saw how much bigger the two young ones were than any of hers, once more mad envy of Dinewan possessed her. She determined she would not be outdone. Rather would she kill all her young ones but two. She said, “The Dinewans shall not be the king birds of the plains. The Goomblegubbons shall replace them. They shall grow as big as the Dinewans, and shall keep their wings and fly, which now the Dinewans cannot do.” And straightway Goomblegubbon killed all her young ones but two. Then back she came to where the Dinewans were still feeding. When Dinewan saw her coming and noticed she had only two young ones with her, she called out: “Where are all your young ones?”

Goomblegubbon answered, “I have killed them, and have only two left. Those will have plenty to eat now, and will soon grow as big as your young ones.”

“You cruel mother to kill your children. You greedy mother. Why, I have twelve children and I find food for them all. I would not kill one for anything, not even if by so doing I could get back my wings. There is plenty for all. Look at the emu bush how it covers itself with berries to feed my big family. See how the grasshoppers come hopping round, so that we can catch them and fatten on them.”

“But you have only two children.”

“I have twelve. I will go and bring them to show you.” Dinewan ran off to her salt bush where she had hidden her ten young ones. Soon she was to be seen coming back. Running with her neck stretched forward, her head thrown back with pride, and the feathers of her boobootella swinging as she ran, booming out the while her queer throat noise, the Dinewan song of joy, the pretty, soft-looking little ones with their zebra-striped skins, running beside her whistling their baby Dinewan note. When Dinewan reached the place where Goomblegubbon was, she stopped her booing and said in a solemn tone, “Now you see my words are true, I have twelve young ones, as I said. You can gaze at my loved ones and think of your poor murdered children. And while you do so I will tell you the fate of your descendants for ever. By trickery and deceit you lost the Dinewans their wings, and now for evermore, as long as a Dinewan has no wings, so long shall a Goomblegubbon lay only two eggs and have only two young ones. We are quits now. You have your wings and I my children.”

And ever since that time a Dinewan, or emu, has had no wings, and a Goomblegubbon, or bustard of the plains, has laid only two eggs in a season.