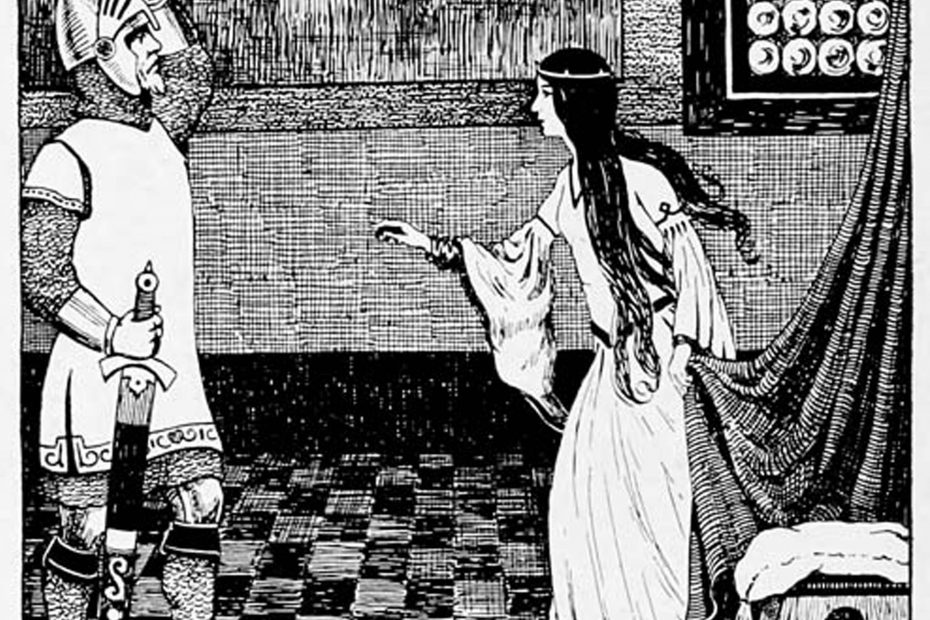 The little town of Caub is very old. Above it in olden days rose the Castle of Gutenfels. Here many years ago lived Philip, Count of Faulkenstein and his only sister, Guda. This brother and sister were orphans and lived together there happily.

Many suitors had come to seek the hand of the beautiful Guda, but she was happy in her brother’s love and wished no other. Often Philip urged her to choose a husband from among the many wooers.

“My dear sister,” he said, “the time may come when I shall have to leave you. War may break out at any time.”

“I have no desire for any love or protection except yours, my dear Philip. I have never seen anyone as yet who has made me wish to leave you.”

Count Philip and Guda used to be a great deal together; where one went the other went, too. So, when the great tournament was held at Cologne, they set out together to see it. The tournament was attended by a large number of knights. One of them seemed to be greatly attracted by Guda’s beauty. He had won all the prizes in the contest, and yet remained unknown to everyone except the bishop.

The manners and conversation of the unknown knight pleased everyone, and especially the Count of Faulkenstein. So much was he charmed by the bearing of the victorious knight that he invited him to visit his castle at Gutenfels. This invitation the knight eagerly accepted.

Philip and Guda welcomed him warmly and were very much delighted with their new friend. The stranger’s admiration for Guda became more and more plain; day by day he grew fonder of the beautiful girl.

“I should delight in lingering here forever,” he said at last.

This, however, could not be, for there was a great war in Germany. The Emperor had died leaving no heir, so there were many who claimed the right to the throne. Richard of Cornwall had most supporters. Many of the nobles had declared for him, and were ready to take up arms in his behalf.

Among those who departed for the war was Philip Faulkenstein. He set out, leaving behind him his guest, who promised to follow within three days, to fight by his side.

“Before I go,” he declared, “I must receive a certain message.”

Two days later the message came. In the meantime the knight had won Guda’s love and her promise to wait for him until his return. So Guda was left alone in the Castle of Gutenfels. Many hours she spent thinking about her absent lover and wishing for his return.

At last, the war was ended, and her brother came back, yet Guda was not happy. She began to grow anxious, for she had received no tidings from her knight.

Weeks passed by. The anxious days stole the color from her cheeks. At last she withdrew to her chamber in sorrow, for she was sure that her knight was dead. She did not even wish to appear when the new Emperor, Richard of Cornwall came to visit her brother at the castle.

When the Imperial Guest came he was clad from head to foot in heavy armor. He refused even to raise his vizor.

“I have come,” he said, “on a personal errand. I have often heard of the great beauty of your sister Guda and I wish to make her Empress.”

Philip was overjoyed at the prospect of such a happy marriage for his sister. Joyfully he bore the Emperor’s offer to her.

“Alas, my brother,” she said, “it is impossible for me to accept the Emperor’s love; mine belongs to another.”

When her reply was carried to the Emperor, he listened calmly, without the least sign of displeasure.

“May I,” he said, “have the pleasure of beholding the lady? Perhaps I may be able to win a more favorable answer.”

With vizor still lowered, and speaking in muffled tones, the Emperor addressed Guda.

“Why, fair lady, do you refuse the suit of your Emperor? Forget your former lover; he is either dead or faithless.”

“Sire,” she replied, “you do me the greatest honor in the world, yet can I not accept it. I must remain true to him to whom I have given my love. He may be dead, but I am sure he is not faithless.”

At this the Emperor threw up his vizor and clasped Guda in his arms. As she looked into his bright face, she recognized him who had won her love as a simple knight.

She no longer refused to listen to his suit. Soon afterward she married Richard Cornwall and became Empress of Germany.