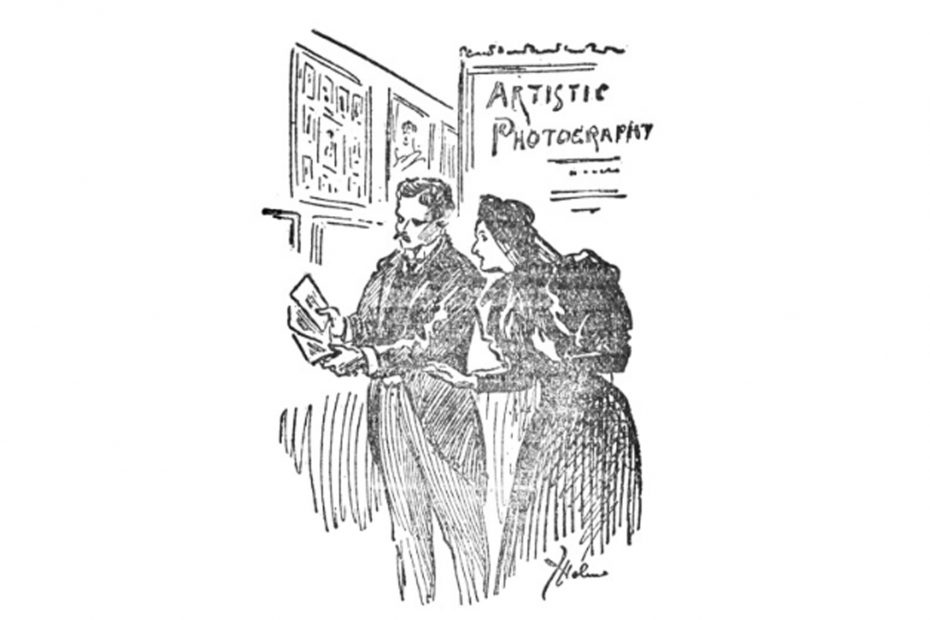 Virgil Hoyt, a photographer’s assistant up at St. Paul, had a whimsical view of the world, and he did not like to be bothered with anything disagreeable. That is the reason that he loathes and detests going to a house of mourning to photograph a corpse. The horribly bad taste of it offends him partly, and partly he is annoyed at having to shoulder, even for a few moments, a part of someone’s burden of sorrow. He doesn’t like sorrow and would willingly canoe 500 miles up the cold Canadian rivers to get rid of it. Nevertheless, as assistant photographer, it is often his duty to do this very kind of thing.

Not long ago he was sent for by a rich family at St. Paul to photograph the mother, who had just died. He was very much put out, but he went. He was taken to the front parlor, where the dead woman lay in her coffin. It was evident that there was some excitement in the household and that a discussion was going on, but Hoyt wasn’t concerned, and so he paid no attention to the matter.

The daughter wanted the coffin turned on end, in order that the corpse might face the camera properly, but Hoyt said he could overcome the recumbent attitude and make it appear that the face was taken in the position it would naturally hold in life, and so they went out and left him alone with the dead.

The face was a strong and positive one, such as may often be seen among many matrons. Hoyt regarded it with some admiration, thinking to himself that she was a woman who had been used to having her own way. There was a strand of hair out of place, and he pushed it back from her brow. A bud lifted its head too high from among the roses on her breast and spoiled the contour of the chin, so he broke it off. He remembered these things later very distinctly and that his hand touched her bare face two or three times.

Then he took the photographs and left the house.

He was very busy at the time and several days elapsed before he was able to develop the plates. He took them from the bath, in which they had lain with a number of others, and went to work upon them. There were three plates, he having taken that number merely as a precaution against any accident. They came up well, but as they developed he became aware of the existence of something in the photograph which had not been apparent to his eye. The mysterious always came under the head of the disagreeable with him, and was therefore to be banished, so he made only a few prints and put the things away out of sight. He hoped that something would intervene to save him from attempting an explanation.

But it is a part of the general perplexity of life that things do not intervene as they ought and when they ought, so one day his employer asked him what had become of those photographs. He tried to evade him, but it was futile, and he got out the finished photographs and showed them to him. The older man sat staring at them a long time.

“Hoyt,” said he, at length, “you’re a young man, and I suppose you have never seen anything like this before. But I have. Not exactly the same thing, but similar phenomena have come my way a number of times since I went into the business, and I want to tell you there are things in heaven and earth not dreamt of——”

“Oh, I know all that tommy-rot,” cried Hoyt, angrily, “but when anything happens I want to know the reason why, and how it is done.”

“All right,” said his employer, “then you might explain why and how the sun rises.”

But he humored the younger man sufficiently to examine with him the bath in which the plates were submerged and the plates themselves. All was as it should be. But the mystery was there and could not be done away with.

Hoyt hoped against hope that the friends of the dead woman would somehow forget about the photographs, but of course the wish was unreasonable, and one day the daughter appeared and asked to see the photographs of her mother.

“Well, to tell the truth,” stammered Hoyt, “those didn’t come out as well as we could wish.”

“But let me see them,” persisted the lady. “I’d like to look at them, anyway.”

“Well, now,” said Hoyt, trying to be soothing, as he believed it was always best to be with women—to tell the truth, he was an ignoramus where women were concerned—“I think it would be better if you didn’t see them. There are reasons why——” he ambled on like this, and of course the woman said she would see those pictures without any further delay.

So poor Hoyt brought them out and placed them in her hand, and then ran for the water pitcher, and had to be at the bother of bathing her forehead to keep her from fainting.

For what the lady saw was this: Over face and flowers and the head of the coffin fell a thick veil, the edges of which touched the floor in some places. It covered the features so well that not a hint of them was visible.

“There was nothing over mother’s face,” cried the lady at length.

“Not a thing,” acquiesced Hoyt. “I know, because I had occasion to touch her face just before I took the picture. I put some of her hair back from her brow.”

“What does it mean, then?” asked the lady.

“You know better than I. There is no explanation in science. Perhaps there is some in psychology.”

“Well,” said the lady, stammering a little and coloring, “mother was a good woman, but she always wanted her own way, and she always had it, too.”

“And she never would have her picture taken. She didn’t admire herself. She said no one should ever see a picture of hers.”

The two stood looking at the pictures for a time. Then Hoyt pointed to the open blaze in the grate.

“Throw them in,” he commanded. “Don’t let your father see them—don’t keep them yourself. They wouldn’t be good things to keep.”

“That’s true enough,” said the lady, slowly. And she threw them in the fire. Then Virgil Hoyt brought out the plates and broke them before her eyes.

And that was the end of it—except that Hoyt sometimes tells the story to those who sit beside him when his pipe is lighted.