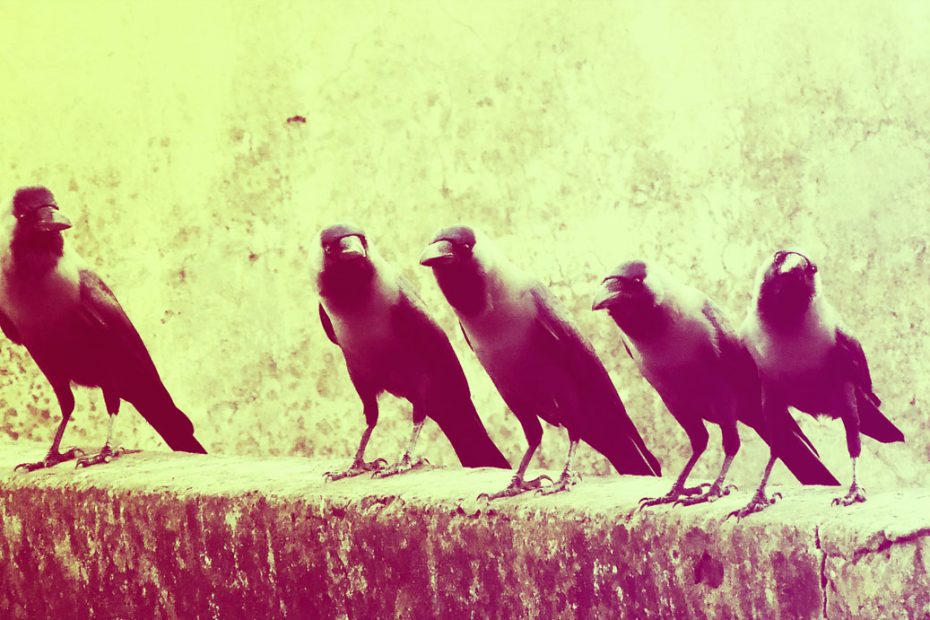 First the world was in darkness, my son.  All who dwelt in the shadow of the East Mulberry Tree had never seen the light, nor could they imagine what it was.  And so, ten red crows – each with three paws – began a perilous journey away from the tree seeking to bring light to this dark world.

Long they flew, through paths both dangerous and dull, until their eyes saw something glowing before them in the darkness of space.  They came to a heavenly realm; a place of brilliant light and heat.  The red crows were delighted with the new-found realm, and dwelt there a long time, learning the secrets of light and heat.  As they grew more skilled in the magic of the heavenly realm, their bodies were transformed so that they gave forth brilliant light of many colors and radiated the same intense heat as their hosts.

When they had plumed all the mysteries in the brilliant heaven, the ten red crows turned and flew back toward Earth.  They were each as bright as a star, and the heat they emitted from their bodies was intense.  Those who dwelt near the East Mulberry Tree first knew of their coming when a faint glow appeared on the dark horizon.  Then the world lit up, colors shining brilliantly against a sky that was azure blue.  But as the crows grew nearer, the light became a searing blue-white light, and with it came heat that was unbearable.  It burned everything it touched.  When the ten red crows perched in the East Mulberry Tree, the whole of the Earth began to dry up and wither in the intense heat.  All who dwelt in the shadow of the Tree were afraid.

“Help us!” they cried in pain, rolling on the green grass and covering their sore eyes against the heat and the brilliance of the ten red crows.

Yi, the Good Archer, heard their cries and saw that the ten red crows were bringing death to the world instead of light.  So he took up his bow and counted out nine arrows.  Then, one by one, he shot the red crows.  Each fell out of the brilliant blue-white sky and burned away to nothing in the darkness of space.  But Yi spared the life of the tenth red crow so that light would not be lost to the world.  To this day, the tenth Red Crow rises each morning from his perch on the East Mulberry Tree and flies once around the world until he comes to rest once again in the Great Solar Tree.

And so it comes to pass that the Tenth Red Crow now dwells in the Heavens as the Sun.