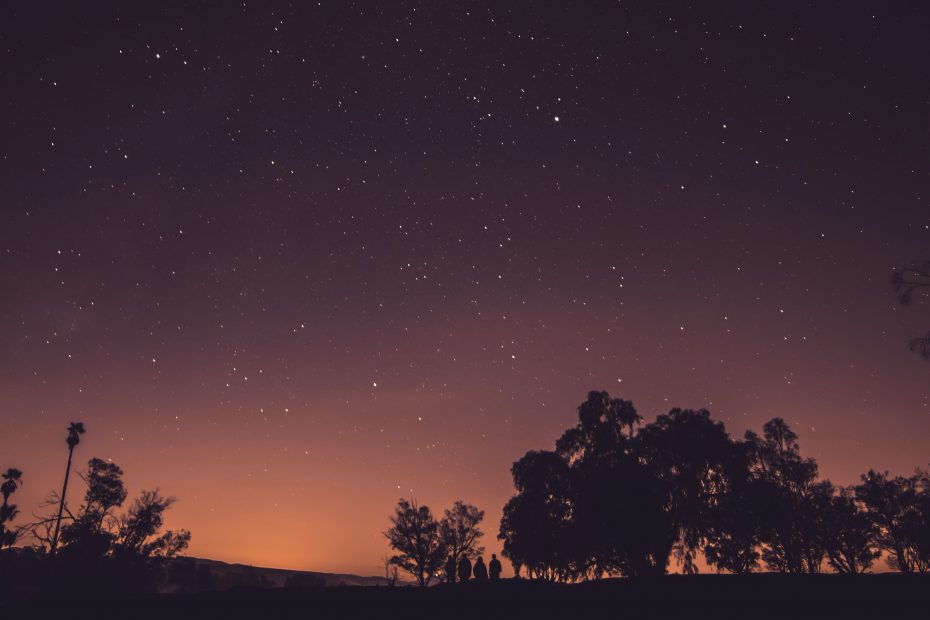 Years and years ago, at the very beginning of time, when the world had just been made, there was no night. It was day all the time. No one had ever heard of sunrise or sunset, starlight or moonbeams. There were no night birds, nor night beasts, nor night flowers. There were no lengthening shadows, nor soft night air, heavy with perfume.

In those days the daughter of the Great Sea Serpent, who dwelt in the depths of the seas, married one of the sons of the great earth race known as Man. She left her home among the shades of the deep seas and came to dwell with her husband in the land of daylight. Her eyes grew weary of the bright sunlight and her beauty faded. Her husband watched her with sad eyes, but he did not know what to do to help her.

“O, if night would only come,” she moaned as she tossed about wearily on her couch. “Here it is always day, but in my father’s kingdom there are many shadows. O, for a little of the darkness of night!”

Her husband listened to her moanings. “What is night?” he asked her. “Tell me about it and perhaps I can get a little of it for you.”

“Night,” said the daughter of the Great Sea Serpent, “is the name we give to the heavy shadows which darken my father’s kingdom in the depths of the seas. I love the sunlight of your earth land, but I grow very weary of it. If we could have only a little of the darkness of my father’s kingdom to rest our eyes part of the time.”

Her husband at once called his three most faithful servants. “I am about to send you on a journey,” he told them. “You are to go to the kingdom of the Great Sea Serpent who dwells in the depths of the seas and ask him to give you some of the darkness of night that his daughter may not die here amid the sunlight of our earth land.”

The three servants set forth for the kingdom of the Great Sea Serpent. After a long dangerous journey, they arrived at his home in the depths of the seas and asked him to give them some of the shadows of night to carry back to the earth land. The Great Sea Serpent gave them a big bag full at once. It was securely fastened, and the Great Sea Serpent warned them not to open it until they were once more in the presence of his daughter, their mistress.

“Let us drop the bag full of night right here where we are and run away as fast as we can,” said the first servant.

“Whether we perish or not I am going to open the bag and see what makes all those terrible sounds,” said the third servant.

The daughter of the Great Sea Serpent was waiting anxiously for the return of the servants with the bag full of night. Ever since they had started out on their journey, she had looked for their return, shading her eyes with her hand and gazing away off at the horizon, hoping with all her heart that they would hasten to bring the night. In that position she was standing under a royal palm tree, when the three servants opened the bag and let night escape. “Night comes. Night comes at last,” she cried, as she saw the clouds of night upon the horizon. Then she closed her eyes and went to sleep there under the royal palm tree.

When she awoke, she felt greatly refreshed. She was once more the happy princess who had left her father’s kingdom in the depths of the great seas to come to the earth land. She was now ready to see the day again. She looked up at the bright star shining above the royal palm tree and said, “O, bright beautiful star, henceforth you shall be called the morning star and you shall herald the approach of day. You shall reign queen of the sky at this hour.”

Then she called all the birds about her and said to them, “O, wonderful, sweet singing birds, henceforth I command you to sing your sweetest songs at this hour to herald the approach of day.” The cock was standing by her side. “You,” she said to him, “shall be appointed the watchman of the night. Your voice shall mark the watches of the night and shall warn the others that the madrugada comes.” To this very day in Brazil, we call the early morning the madrugada. The cock announces its approach to the waiting birds. The birds sing their sweetest songs at that hour and the morning star reigns in the sky as queen of the madrugada.

When it was daylight again the three servants crept home through the forests and jungles with their empty bag.

“O, faithless servants,” said their master, “why did you not obey the voice of the Great Sea Serpent and open the bag only in the presence of his daughter, your mistress? Because of your disobedience I shall change you into monkeys. Henceforth you shall live in the trees. Your lips shall always bear the mark of the sealing wax which sealed the bag full of night.”

To this very day one sees the mark upon the monkeys’ lips, where they bit off the wax which sealed the bag; and in Brazil night leaps out quickly upon the earth just as it leapt quickly out of the bag in those days at the beginning of time. And all the night beasts and night birds and night insects give a sunset chorus in the jungles at nightfall.

Citation: Eells, Elsie Spicer. Fairy Tales from Brazil. Chicago: Cadmus Books, E.M. Hale and Company, 1917. Edited by S.E. Schlosser. This story is in the public domain and is part of the cited work.