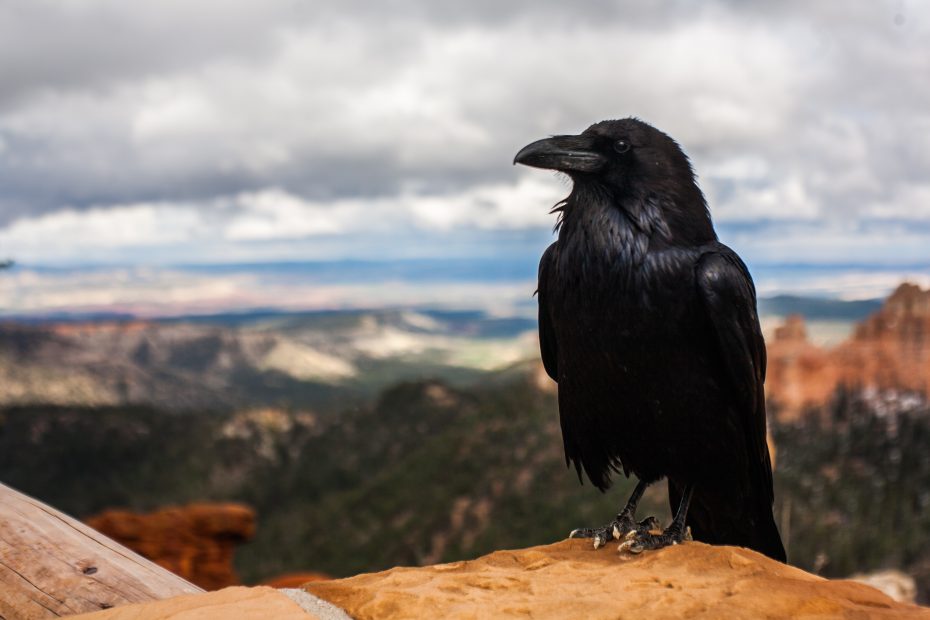 Long, long ago, when the world was still new, the Inuit lived in darkness in their home in the fastness of the north. They had never heard of daylight, and when it was first explained to them by Crow, who traveled back and forth between the northlands and the south, they did not believe him.

Yet many of the younger folk were fascinated by the story of the light that gilded the lands to the south. They made Crow repeat his tales until they knew them by heart.

“Imagine how far and how long we could hunt,” they told one another.

“Yes, and see the polar bear before it attacks,” others agreed.

Soon the yearning for daylight was so strong that the Inuit people begged Crow to bring it to them. Crow shook his head. “I am too old,” he told them. “The daylight is very far away. I can no longer go so far.” But the pleadings of the people made him reconsider, and finally he agreed to make the long journey to the south.

Crow flew for many miles through the endless dark of the north. He grew weary many times, and almost turned back. But at last he saw a rim of light at the very edge of horizon and knew that the daylight was close.

Crow strained his wings and flew with all his might. Suddenly, the daylight world burst upon him with all its glory and brilliance. The endless shades of color and the many shapes and forms surrounding him made Crow stare and stare. He flapped down to a tree and rested himself, exhausted by his long journey. Above him, the sky was an endless blue, the clouds fluffy and white. Crow could not get enough of the wonderful scene.

Eventually Crow lowered his gaze and realized that he was near a village that lay beside a wide river. As he watched, a beautiful girl came to the river near the tree in which he perched. She dipped a large bucket into the icy waters of the river and then turned to make her way back to the village. Crow turned himself into a tiny speck of dust and drifted down towards the girl as she passed beneath his tree. He settled into her fur cloak and watched carefully as she returned to the snow lodge of her father, who was the chief of the village people.

It was warm and cozy inside the lodge. Crow looked around him and spotted a box that glowed around the edges. Daylight, he thought. On the floor, a little boy was playing contentedly. The speck of dust that was Crow drifted away from the girl and floated into the ear of the little boy. Immediately the child sat up and rubbed at his ear, which was irritated by the strange speck. He started to cry, and the chief, who was a doting grandfather, came running into the snow lodge to see what was wrong.

“Why are you crying?” the chief asked, kneeling beside the child.

Inside the little boy’s ear, Crow whispered: “You want to play with a ball of daylight.” The little boy rubbed at his ear and then repeated Crow’s words.

The chief sent his daughter to the glowing box in the corner. She brought it to her father, who removed a glowing ball, tied it with a string, and gave it to the little boy. He rubbed his ear thoughtfully before taking the ball. It was full of light and shadow, color and form. The child laughed happily, tugging at the string and watching the ball bounce.

Then Crow scratched the inside of his ear again and the little boy gasped and cried.

“Don’t cry, little one,” said the doting grandfather anxiously. “Tell me what is wrong.”

Inside the boy’s ear, Crow whispered: “You want to go outside to play.” The boy rubbed at his ear and then repeated Crow’s words to his grandfather. Immediately, the chief lifted up the small child and carried him outside, followed by his worried mother.

As soon as they were free of the snow lodge, Crow swooped out of the child’s ear and resumed his natural form. He dove toward the little boy’s hand and grabbed the string from him. Then he rose up and up into the endless blue sky, the ball of daylight sailing along behind him.

In the far north, the Inuit saw a spark of light coming toward them through the darkness. It grew brighter and brighter, until they could see Crow flapping his wings as he flew toward them. The people gasped and pointed and called in delight.

The Crow dropped the ball, and it shattered upon the ground, releasing the daylight so that it exploded up and out, illuminating every dark place and chasing away every shadow. The sky grew bright and turned blue. The dark mountains took on color and light and form. The snow and ice sparkled so brightly that the Inuit had to shade their eyes.

The people laughed and cried and exclaimed over their good fortune. But Crow told them that the daylight would not last forever. He had only obtained one ball of daylight from the people of the south, and it would need to rest for six months every year to regain its strength. During that six month period, the darkness would return.

The people said: “Half a year of daylight is enough. Before you brought the daylight, we lived our whole life in darkness!” Then they thanked Crow over and over again.