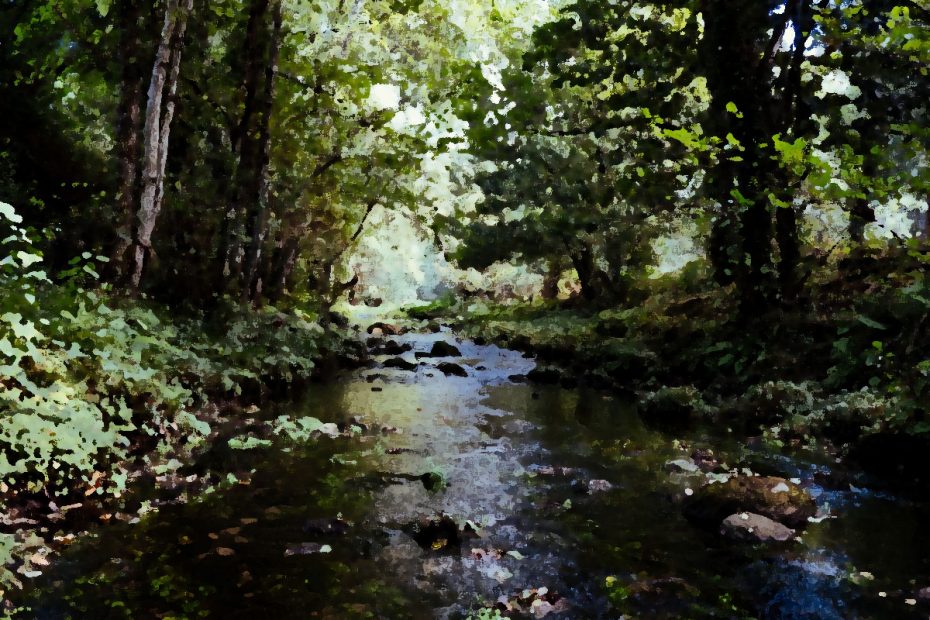 Many and many a year ago, two Micmac warriors from rival villages got into a terrible argument. Harsh words were exchanged, and then knives were pulled. The warriors battled back and forth on the banks of a small creek. They fought with the ferocity of grizzlies, tearing at each other with their knives, ripping at each others clothes and hair.

Suddenly, one of the warriors slipped on the muddy bank and fell into the waters of the creek. His bloody knife slipped from his hand and sank down and down to the bottom, landing upon a rock just beyond his reach. The warrior strained his pain-wracked body towards the knife as his blood filled the waters of the creek, but it was just beyond his fingertips. He thrashed and clawed towards his knife, desperate to reach it before his rival killed him, but no matter how he stretched, it always slipped out of reach.

On the bank above, the victorious Micmac warrior saw his rival sink into the blood-stained waters and lay still, the knife just a hair-breadth beyond his fingertips. He did not rise again. The fallen man’s people found him a few hours later and tenderly rescued his body from the rippling waters of the creek. But when they tried to retrieve his bloody knife from the rock beneath him, it always slipped beyond their reach, though the creek was not deep.

Many and many a year has passed since that bloody day by the creek, and still the blood-stained knife lies beneath the rippling waters of the creek. Whenever anyone tries to reach it, the knife slips out of reach. It is like trying to touch something on the bottom of the sea, although the creek itself is not deep. Even the rushing waters of the spring season do not move the mysterious knife or wash away the blood staining its blade.

For this reason, the creek is called Wokun – meaning “knife” by the Micmac people, and the white men call it “Bloody Creek”.