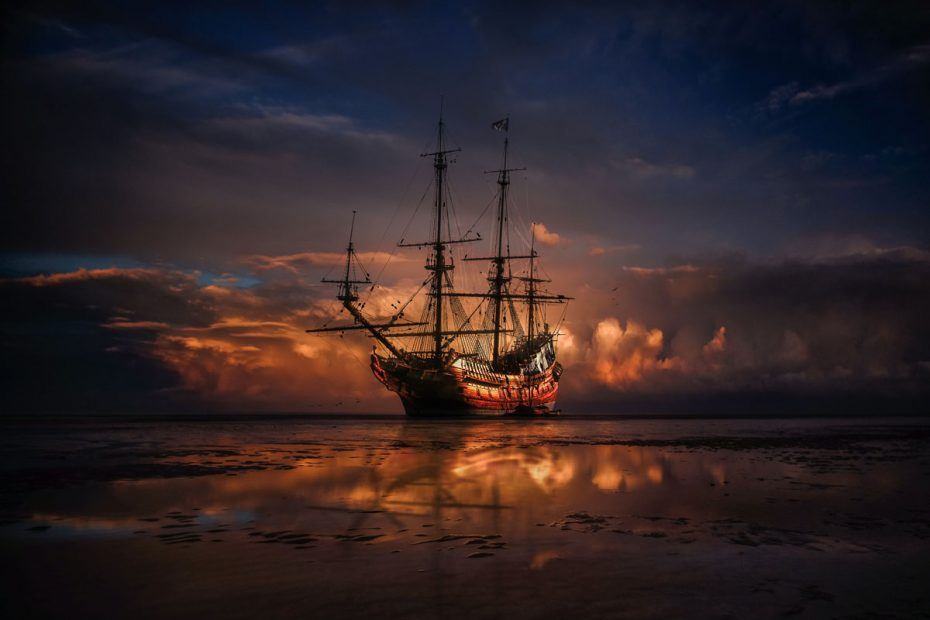 Black Bartelmy was an evil, surly buccaneer who murdered his wife and children and went to sea with a band of pirates as nasty as he. He roamed the Atlantic coast, murdering and pillaging and laying waste to the countryside as he passed. By the time he approached Cape Forchu in Nova Scotia, Black Bartelmy had a ship loaded with treasure; five hundred chests had he full of gold and jewels and goblets and mighty swords.

A thick Fundy fog lay over the bay as the ship approached, and the treacherous Fundy tide soon took hold of the evil man’s ship. The crashing, churning waters of the Roaring Bull, that dangerous ledge of rocks near Cape Forchu, took the pirates ship and smashed its hull.

But Captain Bartelmy spotted land to the starboard side of the ship. He and his trusted mate Ben the Hook had the crew load up the escape boat with every treasure chest they could fit. Then the bold pirate had his first mate murder the other buccaneers so they would not have to share the treasure with them. Ben the Hook crouched just out of sight in the rocking escape boat and slit each man’s throat with his hook as the seaman bent to place his burden in the hold. Then Ben threw each body over the side of the ship into the churning waters below so that the next pirate would not sense a trap when he came forward with his treasure.

When the treasure was loaded into the boat, Bartelmy and Ben the Hook rowed into the calmer waters of the cape. They searched for a place to bury their treasure. Finding a large cave, they piled each chest inside and then covered the entrance with rocks. As Ben the hook rolled the last boulder into place, Bartelmy thrust a sword deep into his chest, twisting it with an evil laugh, and watched as his mate fell dead at his feet.

Knowing that he had to leave this remote spot or starve, the evil pirate captain walked along the edge of the water, searching for a town or a harbor where he might row the escape boat. But Black Bartelmy soon found himself mired in quicksand with no one to save him. Only the gulls heard his dying curses ringing over the cape as he sank down and down into the mire and was engulfed.

One stormy night soon after the pirate’s death, the keeper of the local lighthouse saw a flare going up in the direction of the Roaring Bull. Thinking it is a ship in trouble; the keeper called together a lifeboat crew and launched their boat into the icy waters, heading for the Roaring Bull. But as they approach the vessel in distress, they saw an ancient galleon with tattered sails. Its decks were piled high with treasure chests spilling over with gold. Astride the deck is a solitary man in black. The evil pirate grinned wickedly down at them, gesturing grandly with his cutlass. As the breakers overwhelmed their boat, the last thing the keeper and the rescuers heard was the sound of Black Bartelmy’s ghost, laughing.

They say that the ghost of Black Bartelmy continues to haunt the Cape and the Roaring Bull to this day, and that any rescue crew summoned to save a vessel off the Roaring Bull should take every precaution, because the distressed vessel might not really be there.