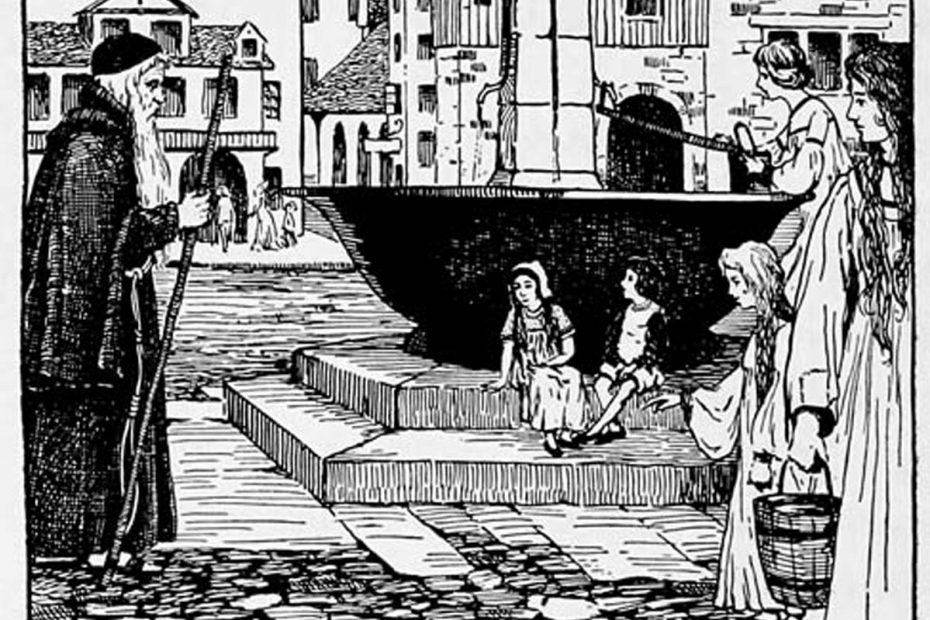 There once lived in the monastery at Heisterbach a kindly monk, of great learning and simple manners. He had studied for many years that he might settle some doubts that troubled him. He had observed that people grow tired of even the best of things. They desire to behold new scenes, to hear new music, and to taste new dishes.

“I wonder if it will be so in Heaven,” he said to himself. “Shall we not grow weary of beauties and joys of Heaven in the endless flow of ages?”

This question perplexed him sorely; but he was unable to answer it to his satisfaction. Wearied with the doubt, he decided to put it away from him if possible. So, one beautiful sunny morning in summer, he turned his steps toward the woods that stretched away for miles back of the monastery.

It was such a morning as makes one glad to be alive. Silvery clouds were floating like great white ships across the blue sky. The gentle breeze was playing among the branches of the trees. Flowers were blooming and birds were singing happily everywhere.

Earth seemed to breathe forth peace and joy for all mankind. Beauty and blessing were everywhere. Yet, with all this to gladden him, Alfus was not satisfied. His heart was not at ease.

“Alas!” he sighed, “how all is changed! The rapture with which I first looked upon this lovely scene, is gone. The beauty with which it once greeted me is no more. Why must it be so?”

As Alfus was pondering on this thought he wandered on, paying no attention to the path he was following. Hour after hour passed and still he walked on, until finally he became weary and decided to rest. He sat down on a mossy bank and began to look about him.

It was a beautiful spot, and one which he had never visited before, although he thought he was familiar with every place in the forest. The trees were tall and leafy. The branches stretched out forming beautiful arches above him. At his feet were delicate ferns and wildflowers of many different colors. He heard the drowsy hum of the bee and saw a beautiful butterfly flitting about from flower to flower.

His admiration was awakened. It seemed as if he saw a new beauty in the things about him, and he forgot that he was tired. Suddenly there came to him the song of a bird which seemed to be the sweetest he had ever heard. He looked and saw the bird perched upon a tree nearby. It seemed to pour forth its song in one strain of perfect happiness. It seemed so thrilling and so beautiful that Alfus could not think it earthly. With intense delight the monk leaned back against the mossy bank, listening to the strain. The song lasted but a moment and ceased as suddenly as it had begun. Alfus desired to hear it again. He looked for the bird, and waited, but it was gone. Around him all was silence. Even the breeze seemed to have ceased its rustling among the leaves of the trees. The monk slowly rose and began his way back through the woods to the monastery.

But how everything seemed to have changed. Could it be that he was in a part of the woods he had never visited before? He, too, did not seem to be the same. His steps were now halting and slow, and all his body seemed feeble and stiff. As he looked at his beard he saw that it was gray.

He walked on in amazement. The trees seemed to have become much larger since he had entered the forest. Even the bushes had grown into tall trees. He wondered if he were dreaming or if he had lost his mind.

Slowly and painfully he picked his way back through the dense forest, and after several hours of walking came to the open land. Eagerly he looked up to the monastery, but that too had changed. It was older and grayer than before and seemed to have increased in size. A new portion had been added, and the entrance gate was not the same which had stood there when he left in the morning. Everything looked older.

What could have happened? He had been gone but a few hours, yet all the world had changed. It seemed as if he were in another century. Alfus passed his hand across his eyes as if to clear his sight and anxiously walked on. As he passed the fountain at the village he saw some women washing, but they were new to him; yet he had known every man woman and child for miles around. Whence had these strange faces come?

“Look,” cried one of them as the old man passed by. “This ancient monk wears the dress of the order, yet his face is new to me; I have never seen him before. Who can he be?”

To this strange remark Alfus paid no heed. He only hastened on the faster. He was beginning to doubt his senses. He went directly to the gate of the monastery. But this was much larger than it had been when he had left. He rang the bell. The sound was no longer the same. The silvery peal of the bell he had known had given place to the harsh clang of a much larger one.

At length there came a young monk to open the door. Alfus was amazed. It was a stranger—a man whom he had never seen before. He gazed at him speechless.

“What has happened,” he said. “Why are all things so changed? Where is Brother Antony? Why does he not open the door as usual?”

“Brother Antony!” exclaimed the monk. “There is no such person here. I am the porter, and no one but me has opened this door for the last twenty years.”

For a moment poor Alfus stood on the threshold as if petrified. Then he beheld two monks slowly passing along the corridor. They, too, were strangers, but he reached forward and clutched one of them by the gown.

“Brethren,” he cried in agony, “I beseech you speak. Tell me what has happened. Only a few hours ago I left the monastery for a quiet walk in the woods, and now when I come back, behold, all is changed. Where is the Abbot? Where are my companions? Is there no one here who remembers Alfus?”

“Alfus—Alfus,” repeated one of the monks thoughtfully to himself. “There has been no one of that name here for a hundred years. There was once a man by that name in the monastery, but he disappeared long ago. I remember hearing about him when I was a small lad, but whether the story is true or not, I cannot tell.

“He went one morning, as was often his custom, to walk in the forest alone,” the monk went on, “and they never heard from him afterward. The monks sought for him throughout the forest day after day, but no trace of him could be found. He seemed to have vanished from the earth. The Abbot thought that God must have borne him up to Heaven in a chariot of fire like Elijah. He was a very holy man, indeed. But all this happened so long ago, that it may be simply a story.”

At these words a sudden light seemed to shine in the face of poor Alfus. He sank to his knees and clasped his trembling hands as if in prayer.

“Now I understand, O God, that a thousand years are but as a day in thy sight. A whole century passed while I held my breath to listen to the song of the bird—the bird which sings at the gate of Paradise. Forgive my doubts, O Lord, and grant that I may enter into thy rest.”

As the monks looked at Alfus, they saw that a great calm had settled upon his face. A radiant smile played about his lips. He sank back gently upon a settle and the wondering monks crowded about him, but to their astonishment he did not move, and when they looked more closely, they saw that his pure soul had flown away to his Heavenly mansion, there to enjoy endless ages of unchanging happiness.